The itinerary of a French journalist / American real estate icon,
or the eternal search for business excellence

Alain Pinel entered professional life in 1965 as a political writer for the French daily newspaper "L'Aurore", covering such topics as Congress and the Prime Minister. Over the next 6 years, Alain Pinel wrote for several newspapers and magazines or commented the news on the radio, i.e.

In 1972, Alain Pinel's life took another direction. Together with his wife and a one-year-old son, Alain sailed to a new adventure and a new career in California. In his new country, he successively became Regional Manager for La Salle Extension University in Northern California and Western Zone Manager for U.S Industries/Beacon, before settling in a business arena where his name soon became well known: Real Estate.


Alain started his real estate career in 1976 with Fox & Carskadon Realtors, in Los Altos, California. Three years later, he became the Managing Broker of the new Saratoga office, in the heart of the Silicon Valley. In 1984, Alain was made Senior Vice President in charge of the South Bay region and a year later, became the Executive Vice President and General Sales Manager of the company. Over his five year tenure in such position, Fox & Carskadon tripled its volume of sales (to $3 billion) and emerged as one of the top residential firms in the country.


In 1990, Alain Pinel left Fox & Carskadon/Better Homes & Gardens and founded a new company by his name: Alain Pinel Realtors. As President and CEO of his new venture, he used international marketing and state-of-the art technology to leverage and identify with the booming Silicon Valley. After having established Alain Pinel Realtors on the path of an ambitious business plan, Alain left the company with his two partners and decided to live another dream: International Real Estate.


The American love affair resumed in 1995. Coldwell Banker brought Alain back to California as Senior Vice President to manage the West Bay region, subsequent to the acquisition of... Fox & Carskadon Realtors.


In 2000, Alain's region, comprised of San Francisco, the Peninsula and the Silicon Valley, was the leading region in the country with an annual sales volume of nearly $13 billion and about 14,000 homes sold.


In July of 2002, well on the way to another record breaking year, Alain returned to Europe and settled in the South of France to pursue other interests with his wife Corinne.

Leisurely life on the Riviera was not meant to last very long. Shortly after his arrival, Alain, together with three partners, founded Imminence, a start-up which soon changed the way real estate is done in France and parts of Europe. With a core business built around a comprehensive adaptation of the American MLS system of brokers' cooperation, Imminence quickly expanded to provide a complete menu of services to the industry, from marketing, financials, productivity and planning tools to training and educational programs.

In Winter 2007, Alain spent a few days in Massachusetts to visit his son. Little did he know then that his "vacation" would eventually lead to a new exciting chapter of his real estate career... After succumbing to the charm of the coastal village of Cohasset, he and Corinne bought a pied-a-terre there and, six months later, decided to leave the Riviera to experience New England living.

Well, they liked it enough for Alain to decide to get the state broker's license and resume his real estate odyssey in the US, although this time on the East Coast. He soon became SVP & General Manager in Massachusetts for William Raveis, the leading independent company in New England and the 11th largest real estate company in the US.

After 4 years of harsh winters and lots of snow shaveling, Alain resolved to leave Massachusetts and return to "his turf", the San Francisco Bay Area. A meeting with an old friend, Gino Blefari, was enough to convince him to join Intero Real Estate Services (the leading brokerage in the Silicon Valley) on Day One of 2012, as SVP, Managing Officer and General Manager of Prestigio International, Intero's luxury estates division.

Over the following 6 years, Alain wrote a weekly online blog regarding all aspects of the business (marketing, financial, fiscal, luxury, etc.) which became an industry standard and a must-read for a worldwide audience.

In early 2018, a year and a half after the Pinels permanently moved to their vacation home in Palm Desert, Alain said goodbye to Intero. Commuting for that long, back & forth between Southern California and the Bay Area is no fun. Besides, when you live in paradise, you might as well take the time to enjoy it for a while and relax in the pool under the sun or in the shade from the mountains and the palm trees, right?

Good time to write a book or two, about real estate of course. Done. 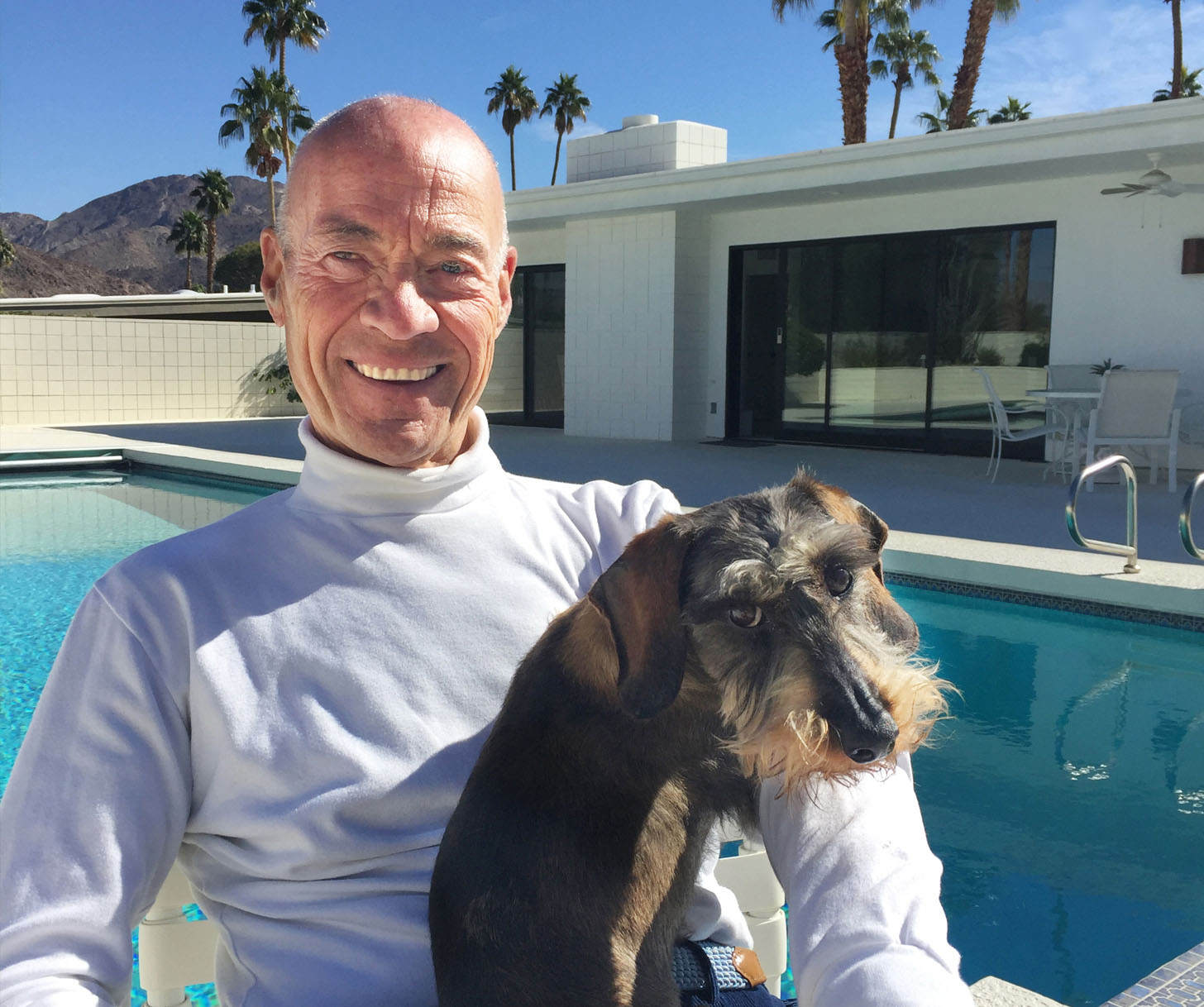 Alain with Bruno in his Palm Desert home.

The Dos and Dont's for Ultimate Success
The Winning Guide for Agents, Managers, Brokers, Company Owners,
Buyers and Sellers 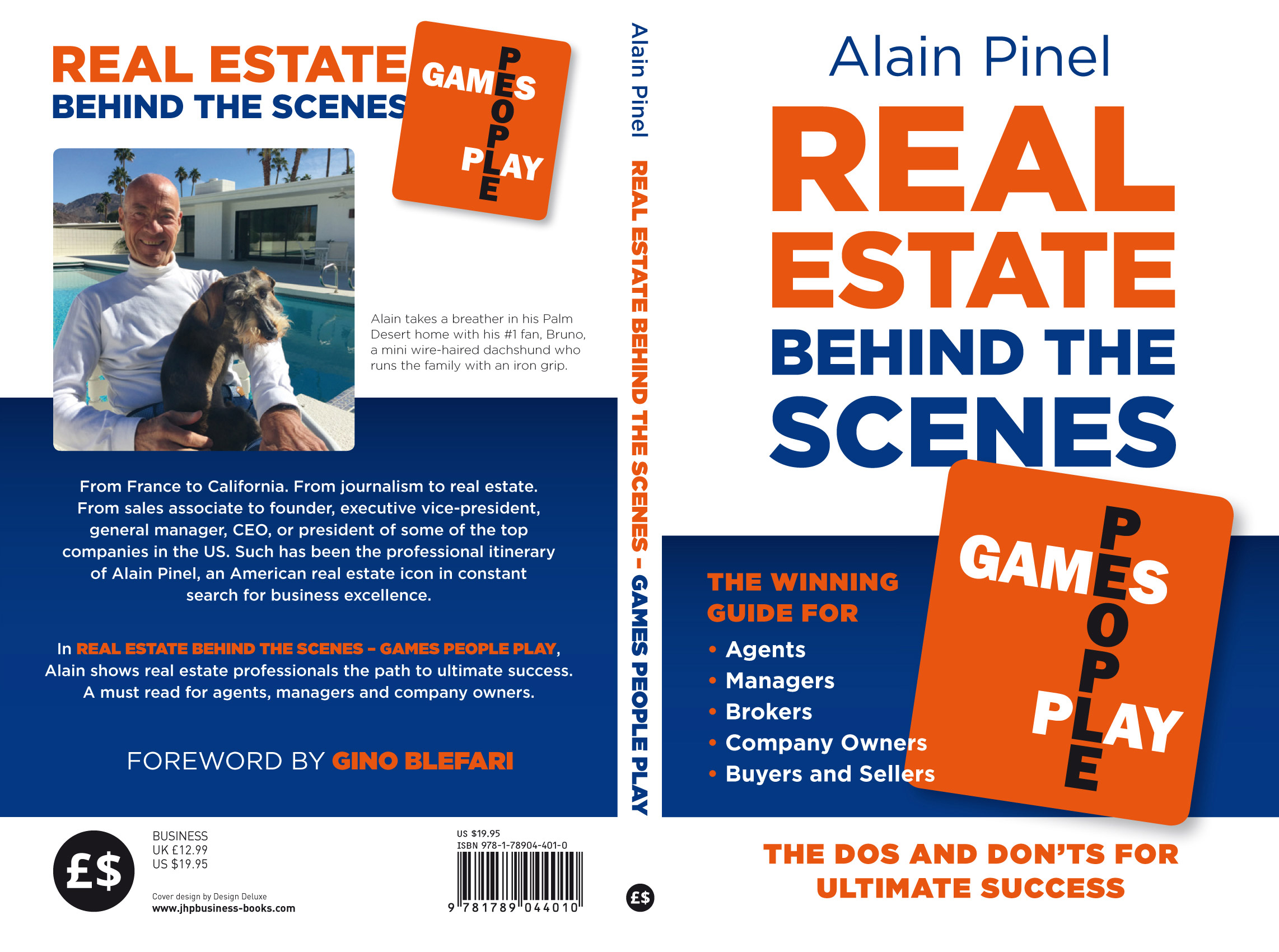 This book, "Real Estate Behind The Scenes - Games People Play", is as engaging and captivating as any exciting novel you have ever read. As a former successful journalist, Alain Pinel knows how to capture your attention, set up the stage with real-life scenarios showing why the property industry is potentially so hazardous and deliver powerful personal messages of wisdom to keep professionals and principals alike out of trouble and in the winning mode.

A must read for professionals and principals alike. It has never been more enjoyable to learn.

Who said a business book had to be daunting, tedious or plain boring? Well, get ready for a welcome delight.

The subtitle "The Dos and Don'ts for ultimate success" is right on point. Nobody knows residential real estate like Alain Pinel and nobody can explain its intricacies better than he does. Over the years, Alain founded or ran several of the top real estate organizations in the country and beyond. He hired and coached hundreds of the most successful managers and agents in the business. In the high-end business, his DNA, he is the recognized master with no equal.

Alain's ambition and passion have always been to "reinvent" the real estate industry, to make it more responsive to the evolving expectations of both the clients and the Realtors. That's why he was the first real estate leader to use state of the art technology and international marketing to bring buyers from all horizons to local listings and facilitate the transaction process for all concerned.

"Real Estate Behind The Scenes - Games People Play" is the perfect go-to-guide and a must read for agents, managers, brokers, company owners as well as for buyers and sellers. Learning made fun. Enjoy!

Includes foreword by Gino Blefari, Chairman of Berkshire Hathaway HomeServices and CEO of HomeServices of America

How to Lead Agents and Managers to Peak Performance
For Managers of all levels, from Office Sales Managers to CEOs 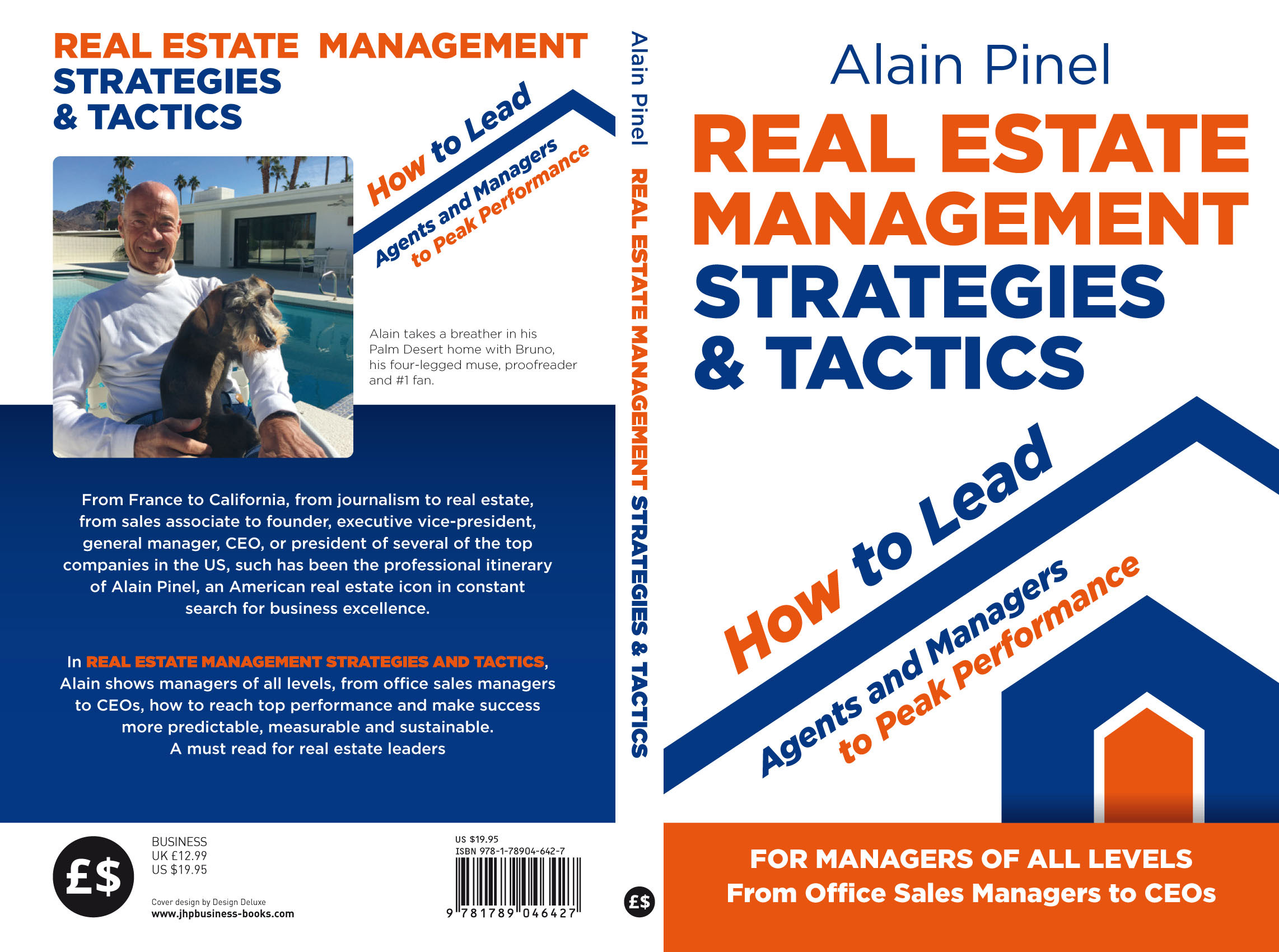 "Real Estate Management Strategies & Tactics" is another enlightening book from Alain Pinel, the renowned real estate entrepreneur and author who ran several of the top 10 companies in the country and mentored many of the leading managers and agents from one coast to the other.

However, luck, just like the other above-mentioned factors, can only last so long. At the end of the day, remarkable and sustainable success depends on the strength of the management corps and the leadership ability of every member of the relay team.

While it can be argued that leadership is an inborn quality, management is not. Management is a applied science. It takes time and a great deal of learning to develop the necessary awareness and eventually transform acquired knowledge into skills.

More than anyone, Alain knows that for each great manager, there is a great mentor -admittedly or not-, a great coach whose inspiring example and repeated teachings create and nurture excellence. Such teachings rely in part on key ideas and concepts, but a lot more on numbers than just magic words of wisdom. Business is a numbers' world.

Success is all about the bottom line. To make sure it looks the way one should expect, managers need to rely on proven methodology, whether it pertains to recruiting techniques, productivity tools, financial planning, goal setting, team psychology or other business essentials. They need to use the right guides, charts and analyses to measure and improve performance.

Such is the value and purpose of "Real Estate Management Strategies & Tactics", the new must read for all real estate leaders. 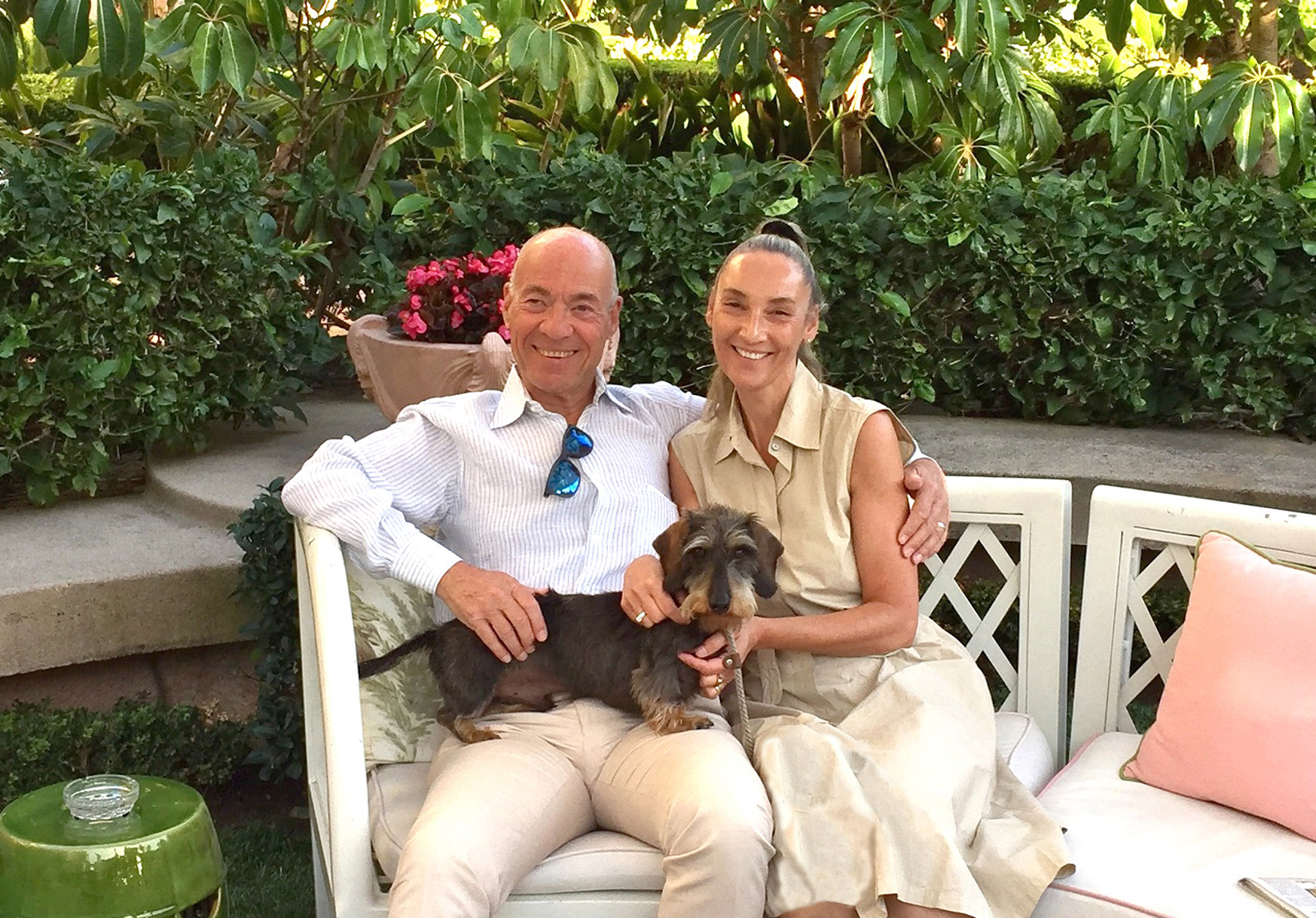